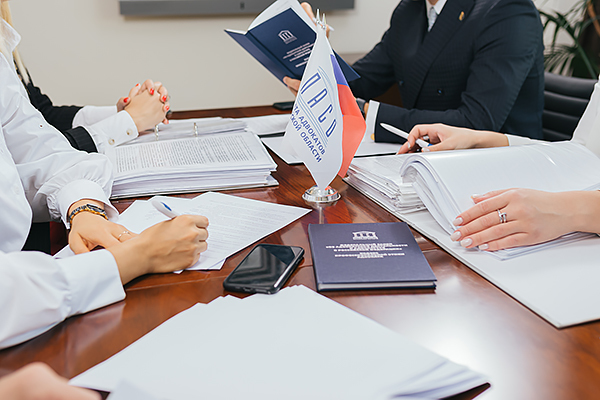 Meeting of the PASO Qualification Commission

On January 20, 2022, the regular (first in the New Year) meeting of the Qualification Commission of the Chamber of Advocates of the Samara Region was held.

The Commission considered ten disciplinary proceedings, four of which were initiated at the request of the court, three - on the proposal of the Vice President, three - on the complaints of principals.

As a result of consideration by the Commission:
- three disciplinary proceedings were terminated due to the withdrawal of the complaint by the court or by the person who filed the complaint;

- in four cases in disciplinary proceedings violations of the law on the Bar and the Code of Professional Ethics of Lawyers were found;

- three disciplinary proceedings were adjourned for reasons recognized by the Commission as valid (the need to provide additional evidence).

The materials of the disciplinary proceedings initiated upon the complaint of the principals who filed claims to the execution of the agreement with the law office, involving the requirement to return part of the unearned fee due to the inadequate quality of the legal assistance provided, were subjected to a thorough discussion. From the essence of the complaint, it followed that the principals entered into two separate agreements with each of the founders of the bureau, paying the fees determined by the agreements. In their explanations, the lawyers disputed the fact of payment of the fee, arguing that they had worked for almost a year without payment, and had completed a large amount of work. The texts of the agreements were submitted to the qualification commission, which determined the amount of payment and indicated that the fee was paid on the day it was signed. There is no clause in the text of the agreement that the payment was not actually made. For a long time of the defense, the lawyers did not present written claims to the principals with a proposal to pay the amount stipulated by the agreement. Such claims were sent by them only after the complaint was filed with the Chamber of Advocates, which allowed only one conclusion to be drawn that these actions were committed solely for the purpose of disciplinary proceedings.

The Qualification Commission, along with the PASO Council, once again focuses the attention of lawyers on the need to strictly comply with the requirements of Article 25 of the Federal Law “On Advocacy and the Bar in the Russian Federation”. Only careful observance of all the requirements of the legislation governing advocacy can reliably protect a lawyer from unfounded claims of principals.

Another point that requires strong recommendations is the mandatory preparation of reports (acts) of work performed to fulfill the subject of the agreement. The list itself, sometimes very detailed, compiled by a lawyer as part of the disciplinary proceedings initiated on the applicant's complaint, BUT! not signed by the principal, has no exceptional evidentiary value. Such a report, signed only by the lawyer himself, is no different from the lawyer's explanations. It acquires a completely different evidentiary value only if there is a signature of the principal, especially with the proviso that all work was completed on time, with high quality and the principal has no complaints about the work of a lawyer.

The preparation of such reports on participation in a certain stage of legal proceedings or at the end of the assignment creates guarantees for the protection of a lawyer if the client suddenly changes his mind or refuses to make the final settlement under the concluded agreement.

In the framework of the above example, the proceedings ended very successfully - with the withdrawal of the complaint by the principal and the termination of disciplinary proceedings after reconciliation of the parties.

Each lawyer should strive for such a result and, if possible, resolve the arising “misunderstandings” with the client, preventing him from filing a complaint with the Chamber of Lawyers.

If the principal seems “problematic” to you, you should try to “insure” as much as possible in case of unfounded claims.

The Qualification Commission recommends that you start interacting with the client by filling out the Suspect / Accused Questionnaire, specially developed by the PASO Council in order to protect the lawyer from unfounded complaints.

All conclusions on the considered disciplinary proceedings will be made within 10 days and sent to the Council of the Chamber of Advocates of the Samara Region, the meeting of which will be held on 01/27/2022

At the end of the meeting, the members of the Commission congratulated their colleague - a wonderful person and professional, a permanent member of the PASO Qualification Commission for twenty years - Mozharova Svetlana Viktorovna, happy birthday!