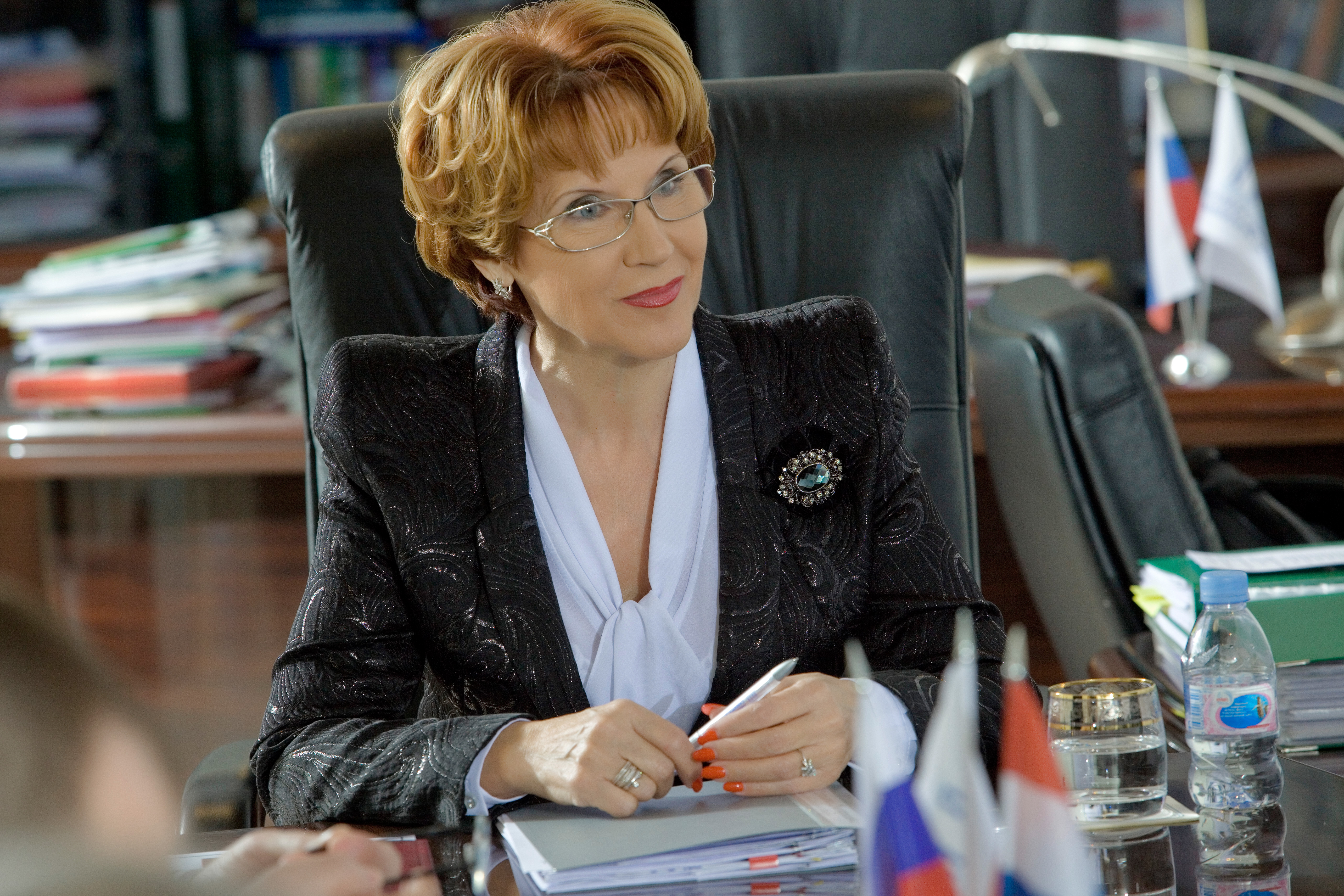 Lawyer, President of the Chamber of Advocates of the Samara Region
April 05, 1953 year of birth

In 1975 she graduated from the law faculty of Kuibyshev State University (the first graduation from KSU). She was assigned to the Kuibyshev Regional Bar Association. The internship took place under the guidance of A. D. Bernstein.

On July 1, 1976 he was granted the status of a lawyer.
The only entry in the work book: a lawyer.
She specialized in the most difficult categories of criminal cases related to charges of embezzlement, murder, robbery, banditry.
Legal experience - 45 years.

From March 21, 2002 to the present - Chairman of the Presidium of SOKA (the largest lawyer education in the Samara region, numbering over 500 lawyers).

On December 21, 2006, by the decision of the PASO Council, she was unanimously re-elected as the PASO President.

In April 2007, she was elected to the Council of the Federal Chamber of Lawyers of the Russian Federation (FPA) by the Third Congress of Russian Lawyers.

Since 2008 Member of the Russian Bar Association.

2010 - By the decision of the PASO Council, she was unanimously re-elected to the post of PASO President.

2014-2015 - First Vice-President of the Chamber of Lawyers of the Samara Region.

From 2015 to the present - President of the Chamber of Advocates of the Samara Region.

2002-2020 - Chairman of the Qualification Commission of the Chamber of Advocates of the Samara Region.

Since 2019 - Chairman of the Commission for the Protection of the Professional Rights of Lawyers.

Since 2004 - Corresponding Member of the Russian Academy of Advocacy.

2010 - Diploma of the Samara Provincial Duma.

2010 - Certificate of Merit from the Ministry of Justice of the Russian Federation.

2012 - laureate of the national award in the field of advocacy in the nomination "Business reputation" and advocacy.

In 2002, at the forum of Russian lawyers, he was awarded the badge "Honorary Attorney of Russia".

2008 - “For high professional skills, successes in the protection of constitutional rights, freedoms and legal interests of citizens and organizations and many years of conscientious work” was awarded the FN Plevako gold medal.

In May 2015, he was awarded the honorary title "Honored Lawyer of the Samara Region".

On April 26, 2016, she was awarded a certificate of honor of the Council of Federation of the Federal Assembly of the Russian Federation "For many years of conscientious work, a great contribution to strengthening the rule of law, ensuring the protection of the rights and freedoms of citizens."

December 6, 2019 - laureate of the Lawyer of the Year award in the Samara Region in the Human Rights Activity category.

“Each award has its own value. It is very important when colleagues evaluate the work. I perceive state awards not as personal merits, but as evidence of positive changes towards the formation of the rule of law ”.

Labor biography of TD Butovchenko is inseparable from the activities of the Chamber of Lawyers of the Samara Region. Among the projects implemented in PASO on the initiative and with the direct participation of Tatyana Dmitrievna Butovchenko are the following:

2005 - the first advanced training courses were organized in the Chamber of Lawyers of the Samara Region. Since then, PASO has held over 20 training events annually. The system for raising the professional level of lawyers, according to the Federal Law of the Russian Federation, is exemplary. TD Butovchenko personally conducts lectures and seminars on the organization and standards of advocacy, topical issues of advocacy, analysis of disciplinary practice.

In 2005, following the results of two years of activity, she was awarded the FN Plevako Gold Medal for the successful solution of organizational issues of the establishment of the PASO Chamber.

On April 1, 2008, the PASO Subsidized Legal Aid Center for the Kirovsky and Industrial Districts of Samara began operating in an experimental mode, transferred to a centralized distribution of cases "by appointment" through a coordinator.
Since 2009, the automated information and analytical system "Advocacy", on the basis of which the SUP Center operates, has been introduced throughout the region.
Currently, the SJP Center annually distributes in the Samara region more than 50 thousand requirements for the appointment of lawyers as defenders in criminal proceedings, as well as as representatives in accordance with Art. 50 Code of Civil Procedure of the Russian Federation and Art. 54 CAS RF.
On June 25, 2018, the Deputy Minister of Justice of the Russian Federation D.V. Novak and M.L. Halperin, having personally familiarized himself with the work of the SUP PASO Center, gave the project the highest assessment.

On March 25, 2010 PASO started to implement the project "Electronic Chamber of Lawyers of the Samara Region"
(InternetP@SO).

From January 1, 2011, PASO switched to an electronic document management system.

August 1, 2011 - on the basis of the Samara Regional Bar Association, the Center for Legal Protection of the Population was created, which provides free legal assistance.

On February 27, 2014, by the decision of the PASO Council, the PASO Young Lawyer School was established. Following PASO, similar projects were launched in other regions. In 2019, the School of Young Lawyers PASO was awarded the Lawyer of the Year award in the Legal Education category.

On August 1, 2019, a project of electronic registration for visits by lawyers to their clients was launched, held in the FKU SIZO-1 of the Federal Penitentiary Service of Russia in the Samara Region.

From April 27 (June 24), 2004 to the present day, the journal "Bulletin of the Chamber of Lawyers of the Samara Region" has been published: 60 issues of a full-color glossy edition have been published.

January 25, 2010 - at the meeting devoted to the discussion of the draft law "On the system of free legal aid in the Russian Federation", the presentation of the documentary film "PASO: Ideas. Beginnings. Experience". On February 17, 2010, the FPA RF recommended introducing the PASO experience in all regional chambers of law.

On July 1, 2010, on the initiative of T. D. Butovchenko, the Day of the Samara Bar was established.

2012 - with a circulation of 400 copies, the collection “Decade. The practice of implementing the Federal Law "On advocacy and the legal profession in the Russian Federation."

On July 2-5, 2014, the All-Russian Festival of advocacy and the interregional conference "Young Advocacy of Russia" were held in Samara, timed to coincide with the celebration of the 150th anniversary of the Russian advocacy.

2016, 2017 and 2018 - the Internet resource paso.ru was recognized as the "Best website of the Bar Association" based on the results of the competition.

2017 - the collection “15 years keeping pace with the times. The practice of implementing the Federal Law "On advocacy and the legal profession in the Russian Federation."

From 2002 to the present, PASO has been annually holding cultural and sports events at the highest organizational level.

Life credo is not to subtract and divide, but to multiply and add (the author's mathematical theory, proven in practice).

He is engaged in theatrical, literary, vocal, dance, photography, phyto-design, cultivation and reproduction of ornamental plants, showing by his own example that "a talented person is talented in everything."

“There are few people in our corporation who are so devoted to the legal profession and who have done so much for it as you do. First of all, thanks to you, the Chamber of Advocates of the Samara Region is one of the leaders of our corporation: it develops and implements the most advanced organizational mechanisms, verifies and analyzes disciplinary practice with maximum accuracy, leads a rich cultural and sports life.